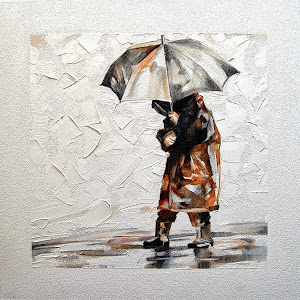 Hermanus artist Terry Kobus will be exhibiting 30 of his latest paintings and drawings entitled “Round & About”, at Bamboo Gallery in opening on Tuesday 29 October

The works on this his 7th annual solo exhibition at Bamboo Gallery fit neatly into an aesthetic and painting style that has earned him popularity and admiration from art collectors locally and internationally.

While several of the paintings have his trademark dynamic colour palette a new figurative series worked in graphite and oil paint are charming and sensitively rendered. The blocky chunks of paint palette knifed onto the canvas are set against soft sepia tones. The images unfold before your eyes, evoking feelings of nostalgia in the viewer.

Exploring round and square formats this year’s paintings revisit some of his favorite themes, including his ever popular Nguni Cattle studies.

Kobus has had works exhibited in , and across and has works in many International collections. Hermanus is his home and Originals Gallery in the town's main street is his working studio where visitors can see him at work daily on new and exciting paintings 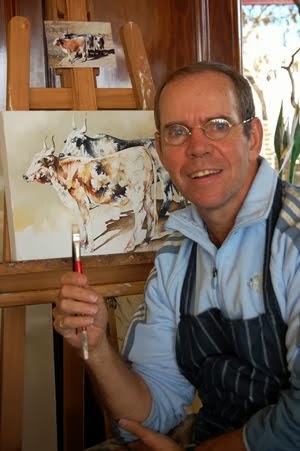 Was born and educated in Zimbabwe. He enjoyed spending time in the bush while growing up and this is evident in his choice of subject matter as he still returns to remote places to find inspiration. He left Zimbabwe and moved to South Africa to study Fine Art in the late seventies after which he accepted a post as lecturer in Graphic Printmaking at the then WITS Technikon in Johannesburg. He has been involved in graphic design for 30yrs and returned to his first love, oil painting, 10 years ago.

He produces a variety of styles and sized works each displaying fine craftsmanship and execution and is renowned for his exquisite Nguni Cattle paintings. His passion for mountain biking has allowed this interesting synergy. Riding his bike into remote areas, camera and sketchbook ever ready, Terry collects reference material for paintings of these unique indigenous cattle in the rural areas of South Africa. From quick sketches in his journal to oil studies on wood and more detailed larger paintings his works capture moments in time away from the big cities in the grasslands of Zululand, the Drakensberg and along the Transkei wild coast. The scenic beauty of the Western Cape has also offered inspiration, evident in Terry's paintings of Walker Bay and the Overberg.

Hermanus is his home and Originals Gallery in the town's main street is his working studio.